Jack was once a Greek Ghost Dog. He had been dumped as a puppy at Lemnos Municipal Dog Shelter where he spent the next 3 years of his life incarcerated 24/7 in a tiny kennel with his friend Milo.

The only human contact was a gruff farmer who was paid to feed the dogs and clean their kennels but the dogs were often left for days stinking in their own pee and poo with flies circling their buckets of sawdust like kibble.

With all hope of adoption gone, Jack had gave up on life, withdrew into himself and became a Ghost Dog.

The only chink of light came with the arrival of 2 lady volunteers who would visit the shelter on their one afternoon off. That was the one happy afternoon in seven when the dogs would get to play together and if there was time then some might get a walk.

Fortunately for Jack he had some guardian angels and after 3 long years the Starlight Barking Trust came to his rescue and offered him a foster home In the UK.

Jack arrived in the UK with Milo in July 2019. They were both terrified. Doors, gates, people, everything was a challenge. Milo was very brave and soon found himself a lovely understanding home who understood his fears.

Poor Jack remained traumatised and sank deeper into his shell and was not going to wag his tail for 9 whole months. He was in an experienced foster home with 2 other dogs and that was the only time he was less anxious when cuddled up with one of them.

Everyone fell in love with this poor little soul but despite all the adoption requests nothing worked out for Jack.

That was when village post lady, Sophie, came into his life. Sophie is a bit of a character and knows all the dogs on her rounds! The dogs all love Sophie as she is never without her treat bag..

Sophie first met Jack the day after he arrived in the UK with Milo. He was shaking with fear from the back of his crate so she just said hello from a distance. Weeks passed with little sign of Jack ever wanting to go near a human. For months he had to be carried into the garden to pee as he could not brave doorways. And walking him was totally out of the question. He was terrfied..

It was like he had shut down completely. His foster mum had never had a dog like him before and she worried that she should never have offered to foster him. It hurt that the last time Jack had wagged his tail was back in the shelter in July 2019. It took until April 16th 2020 for his tail to wag again and a huge milestone in Jacks life.

Over 2 years Sophie watched as Jack finally became a real dog and let strangers into his life. With each milestone Sophie kept thinking of the reasons why Jack was so traumatized but knew she was powerless to change his past.

Then whilst volunteering in Columbia earlier this year, Sophie found a lifeless dog lying in the road taking his last breaths. She tried to comfort him and thought about Jack. She couldn’t change his past but at that moment she decided she could do something to make life better for his shelter friends.

Inspired by Jack, Sophie is taking on her own challenge and has asked her friends to help her raise funds for the hell-hole shelter where Jack lived for 3 years.

Sophie and friends are setting out at 5am on July 18th and plan to trek Snowdon 3 times in one day – the equivalent of climbing Mount Olympus in Greece.

Each of her friends have pledged to raise a minimum £100 for Lemnos Dog Shelter which will fund the the refurbishment of the shelter and make it a more humane place with the creation of a much-needed puppy house with a covered run where the pups can socialise and run free rather than be incarcerated in a tiny cage 24/7, as Jack was.

Other friends who don’t feel quite ready to tackle the 20+ mile trek in one day are invited to work in a team of 3 and split the trek and the sponsorship between them with a 5am start for LLANBERIS – PYG estimated 10am change over at PYG to tackle MINERS both ways then third change over estimated at 3pm for PYG – LLANBERIS.

We welcome other shelters to send their own team and raise sponsorship for their own projects for their Ghost Dogs wherever they are in the world.

On behalf of Ghost Dogs everywhere an enormous thank you to these ordinary, extraordinary people for wanting to make a difference!

We will continue to raise awareness and try to find homes for Ghost Dogs like Jack. You can find 100s of them available for adoption on our website: www.starlightbarking.co.uk/ghost-dogs

Message from Jack: Wow! I cannot believe that little old me found such a lovely lady like Sophie who is going to raise lots of money for my friends back at the shelter. Sophie also kept my mum motivated when she was really sad because all she thought I wanted to do was dig my way back to Lemnos! My first year was incredibly scary and my mum actually thought I was happier back in the shelter because I didn’t wag my tail for 9 months! Sophie was really kind and every time we saw her (because we didn’t for a while during this Lockdown thing) she kept telling mum how much I’ve changed. Mum couldn’t see it – but Sophie could. Anyway, now I’m almost a regular dog – I can get through the patio doors at last and now bark at delivery men along with my rescue brother and sister, also from Lemnos Shelter.

Message from Sophie: I was volunteering on an island in Cartagena, Colombia (a very poor place with no running water) when I came across a little doggy lying in the street, I thought the worst as I went over to stroke him, lifeless on the road still breathing and just about alive – heartbreaking to see – it was then that I realized I wanted to do something.

Going back to my brother’s apartment I got thinking!

Seeing Jacks foster mum welcome all those poor doggies to her home over the last 3 years gave me the idea to do something for the Ghost Dogs. I will always remember the first day I met Jack and Milo. Jack was trembling with fear in the corner of his crate. The first time I saw Jack wag his tail was a special moment for me too!

Jack, Sophie and the Ghost Dogs story can be found here. 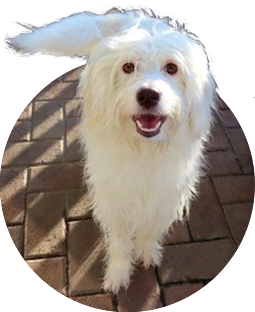 Well it's official - mum has finally relented and I get my own blog! Me, just a little rescue dog - how super cool is that!

Read about my story here

The greatness of a nation will be judged by the way its animals are treated.